In a certain way, this “new” economy is a return to the values that preceded the era of all around capitalism that we have known since the 50’s. This model is based on competition, to the benefit of the market, excessive individualism and consumerism. A model that shapes humans as wage-earners and consumers and for those who have money, such as investors, the lure of profit is encouraged.

However, not so long ago, in villages and city neighbourhoods, collaboration, trade, and mutual aid in the community were dominant. This also holds true for humanity as a whole. In general, humans lived in harmony with nature; as was the case for Native populations of the Americas before the colonization imposed by the Europeans. Humans lived in harmony with nature, which was the source and the support for life. It wasn’t perceived as a resource to be exploited.

In some ways, the new economy must come back to the fundamental values that have been those of humanity and of most human communities of the planet. In other words, the economy needs to serve humans instead of humans being at the service of an economy that ensures that 1% of humans own 50% of all riches.

We thus need to reinforce the alternate trend to capitalism that already exists. In fact, it is not a new economy. This alternate movement to capitalism dates back to the 19th century in an era when capitalism was imposing itself. It is thus that workers have given themselves defense tools such as trade unions, but also mutual funds and cooperatives in order to fulfill their needs. This movement has never ceased to exist, and has even expanded in times of crisis, not necessarily through ideology, but through need.

Solidarity Economy as an Alternative Model

One of the promising avenues appears as an alternative model to the dominant system: the solidarity economy. Depending on the countries and the cultures, it takes on a slightly different name. However, fundamentally, the similarities are great and common characteristics can be found such as the pre-eminence of human needs to the needs of capital, a reduction of inequalities, the respect of the fundamental rights of all humans, an economic model that respects nature, including repairing the damage already caused.

Everywhere on the planet, human communities are already on this route or are taking this direction. We can consider that by choice or necessity, between 30 and 50% of human activity respects these values. Indeed, one must not forget that beyond the usual examples such as cooperatives or non-profit enterprises, in many countries, an important part of the communities, especially in rural areas, lives largely outside of the large production and consumption track as it exists in so-called developed countries. Thus, it would be possible to topple over whole societies towards a model that is not submitted to the diktat of capital or of the 1% who are owners; providing that they do not direct their societies to the overconsumption model.

Resistance will be strong. The ideology of the dominant model counts on humans’ egotistical feelings. Religions are used to divide. Racism and discrimination wreak havoc in all societies.

However, a majority of humans are not fools, and they realize that it is impossible to continue in the same way that is going to bring our current civilization to destroy itself by making the planet unlivable for the majority of current species, including the human species.

It is increasingly recognized by scientists that the human species has survived and developed because collaboration was the species’ fundamental characteristic.

The same goes for survival. The key to this survival is cooperation and solidarity. Otherwise, our species is threatened because it is destroying the biosphere that has allowed it to emerge as a species. 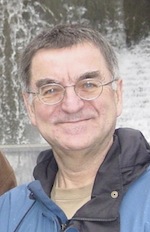 Yvon Poirier is Secretary of the Board of Directors of CCEDNet and President of the International Committee.

He is also a member of the Board of Directors of the Intercontinental Network for the Promotion of Social Solidarity Economy (RIPESS). As such, he participates in various activities of the network, including in the UN Inter-Agency Task Force on the Social and Solidarity Economy. Recently, he participated, as a RIPESS delegate in the group of Civil Society and Non-governmental Organizations at the UN General Assembly that adopted the Sustainable Development Goals (SDGs) for the 2015-2030 period. He accompanied his colleague from Mali who had been chosen as a speaker in an interactive dialogue during the General Assembly.

During his years in education and trade unionism, he was continuously involved in social movements, especially in local development and community economic development. He was thus the founding President of the Corporation de développement économique communautaire Québec (CDÉC) in 1993-1994.

He has been involved in RIPESS since 2004, and he has written various documents on the origin of the SSE concepts and on the role of Québec trade unions in SSE. He has participated in many World Social Forums and in various RIPESS member meetings, and this, particularly in Asia.