One of the most successful meetings we had was the National Policy Forum held in Vancouver in 2001. It had been well prepared for – preliminary meetings had been held in many provinces.  And Mike Toye and David LePage (among others no doubt) were on site as meeting trouble-shooters, key to making that meeting the success it became.

One of the evening sessions included a talk by the very charismatic founding CCEDNet member Rankin MacSween, Executive Director of New Dawn Enterprises in Sydney, Nova Scotia. As many people have learned, a relaxed Rankin spoke, as usual, in Cape Breton lilts, colloquially, amusingly, and, above all, trenchantly. But this time, for a neighbor (unknown to me) in the audience at a table next to mine, Rankin’s relaxation and easy humor trumped any other facet of his presentation. 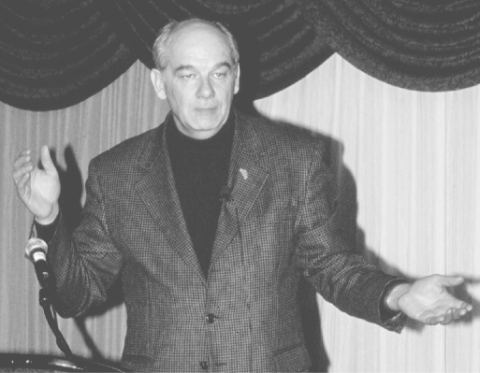 Everybody else was alternately rolling in the aisles and then caught up in some striking insight, but this neighbor at the next table finally exploded: “That guy is drunk!” I did not try to explain.

These days I am deep in the task of working with Rankin on a book about New Dawn that embodies the same humor and compelling insights.  However, I will this time seek to correct any misconceptions by neighbors, near or far (we do though enjoy a spot of scotch along with the work).

Honorary lifetime member of CCEDNet, Stewart is one of the pioneers of CED in the US and Canada, as both a policy adviser and a designer and manager of CED institutions. As head of the (U.S.) Center for Community Economic Development, he helped create the first finance institution for CED, the Massachusetts Community Development Finance Authority. He helped start Canada’s first community development corporation, New Dawn Enterprises, and headed the Community Economic Development Center in Cape Breton, Nova Scotia. A consultant, researcher, and author, Stewart currently specializes in community and development finance as an associate with the Canadian Centre for Community Renewal.

Hear Rankin for yourself in the video below