A very full four days wrapped up today at the 5th International Meeting of the Social Solidarity Economy (SSE) in Manila.

My last blog post outlined the ambitious agenda organizers had laid out for the event, as well as the opportunities and challenges

facing the development of the social solidarity economy globally that were identified on the opening day.

Since then, I’ve attended (and presented at some) workshops presenting the diversity of SSE practices around the world, examining the connection between the SSE and place-based development, and strategizing about communications and profile of the SSE.  These were just a few of the numerous workshops (both planned and some spontaneously organized, like a session on gender and the SSE that CCEDNet member Ethel Côté was involved in pulling together) that rounded out the program.

Discussion at the workshop on Asian, Australian and U.S. SSE experiences

On the afternoon of the second day, delegates were treated to different site visits, which began with a lunch hosted by the vice-mayor of Quezon City (the largest municipality of metro Manila), who described how the city is supporting co-operative development, promoting food security with community gardens, and actively engaging civil society partners in the shared development of policies and programs.  This was an impressive presentation, and I hope CCEDNet will be able to share the example of her leadership more broadly via a future webinar focusing on effective municipal practices in community economic development. 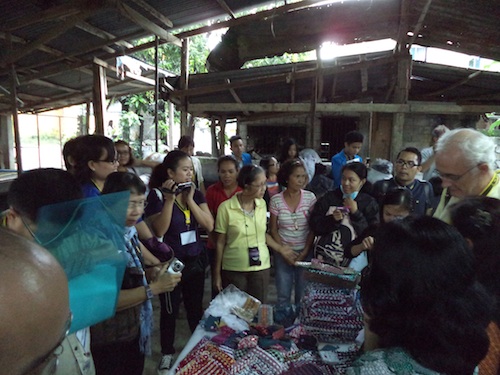 Visit to the Payatas multi-purpose cooperative

Later that afternoon, our bus wound through ever-shrinking streets into a very poor neighbourhood where we visited a multi-purpose cooperative that creates income-generating opportunities for women through the production of handicrafts.  During the return bus ride, a group of Indonesian business students led a rousing sing-a-long of traditional songs.  Everyone was encouraged to contribute and defend their national honour, so we enjoyed songs from Indonesia, the Philippines, Thailand, Japan, Germany, China, Spain and Canada (Mike Lewis was there to defend Canada’s musical honour, saving me and the country from embarrassment 🙂 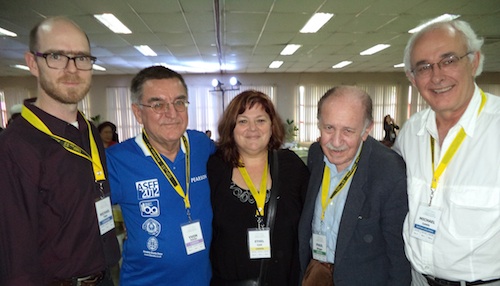 I particularly enjoyed visits with Peter Uttering of the United Nations Research Institute on Social Development and Paul Singer, Secretary of the Solidarity Economy in the Brazilian government.

There was also a meeting of North American continental network, which is a partnership of the US Solidarity Economy Network, the Chantier de l’économie sociale du Québec, the Groupe d’économie solidaire du Québec and the Canadian CED Network.  At this meeting, we identified study tours and other strategies for promoting cross-border learning as the priorities to strengthen collaboration.

Government engagement, which is always a strategic focus for host nations of a RIPESS Forum, was impressive here in the Philippines.  On the last two days, representatives from the Association of South-East Asian Nations heard presentations from keynote speakers and participated in the closing plenary, and this afternoon the Philippine Senate Majority Leader came to hear the closing recommendations from the conference and endorse the need for a new economic model, confirm his commitment to co-sponsor a Social Solidarity Economy bill in the Senate.

In the reporting back from the numerous workshops, participants acknowledged that, while the SSE may be advanced in jurisdictions like Brazil and Québec, it is in early stages of development elsewhere.  At the same time, much progress has been made in the development of national, continental and global networks, and participants affirmed their desire to continue strengthening information sharing and global connections to support a faster emergence of the social solidarity economy

The recommendations from the meeting to the post-2015 United Nations Development Agenda emphasized:

The plenary session decided, however, not to ratify these recommendations now, but to present them online for a fuller consultations in which more RIPESS members can have input before they are finalized.

The conference concluded with appreciation for the dedicated organizing efforts of our hosts, the Asian Solidarity Economy Council, farewells to lots of new friends and allies, and a renewed energy to continue building more inclusive and sustainable economies in every corner of the world.

Although CCEDNet members have been active in building the global network for over a decade, this was the first RIPESS conference I have attended.  What struck me most was what I also love about CCEDNet conferences:  the people are marvellous.  I don’t mean to be pollyannaish – they aren’t perfect; there are the usual conflicts and shortcomings and characters you’d expect in a broad, emerging, international coalition. But I think Peter Uttering was onto something when he said in his closing remarks that this was the most exciting conference he had attended in all his years at the UN (and I suspect he’s attended a few), and that the chances for our success were greater than many others because of our shared vision and values for economic transformation towards a fairer world.  The kind of people who are prepared to commit themselves to such a g