This is Part 2 of a 2-part series. Click here to read the first in this series.

My suggestion is that the ownership of capital itself needs to change. We need to democratize ownership.

We need to look outside the dichotomy we have seen so far of either:

We need to look at a third approach, of democratic ownership by people and communities. There are many possibilities, which can certainly be combined:

Many other examples could be given of organizing the economy in a very different manner. The key idea is that the concentration of most wealth in the top 10% is not inevitable.

If we organize differently, in a deliberate and conscious manner, we could turn things around surprisingly quickly.

Of course, to achieve this, people need to be conscious citizens instead of just consumers. Even if the 1% (and the 10%) are very strong with their control of the economy, media, and influence in politics, they are still in fact a very small minority. As long as citizens think there is no alternative, they will continue exercising control over our society. But, as the examples show, the possibilities are enormous when people become conscious. After all, it people stop buying at Walmart, or stop going to McDonald’s, those corporations will change or shrink and disappear.  People are not forced to buy from them. We have just been persuaded to do so. 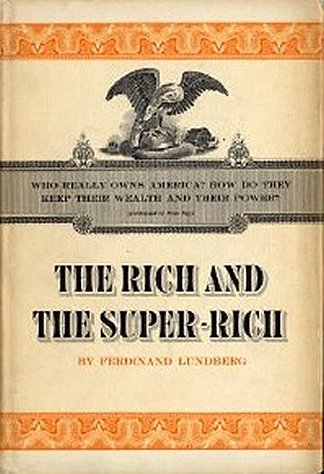 At the same time, we need to work on all fronts. For example, Foundations were started as an inheritance tax evasion. I remember well a book I read in 1968 by Ferdinand Lundberg The Rich and the Super-Rich. A Study in the Power of Money Today (New York: Lyle Stuart, 1968). This book explained how foundations were invented in the US by the billionaires such as Carnegie, Mellon, Ford, Rockefeller and others in order to avoid inheritance tax.  They were able to get the US Congress to vote these laws, giving them control over the foundations and the power to name people to the Boards. In more recent times, we have Melinda and Bill Gates, Warren Buffet and the Walton (Walmart) family.

What would be an optimum situation?  We can easily imagine much more equal societies, where those with upper incomes and those who have accumulated wealth might have 5-10 times more income than average, instead or 250 or 500 times more. There is absolutely no justification for the appropriation of most wealth by a tiny minority. The super-rich have so much money that they cannot use it all, while at the same time people are undernourished and live in inhuman conditions. This is both indecent and immoral.

Unquestionably, Piketty has rendered an important service to humanity. More or less like the scientific proof that the International Panel on Climate Change (IPCC) has established for global warming.

In both cases, we have proof that the two problems – inequality and global warming – are results of human activity. They are not “acts of God,” a result of natural disasters, or even a question of human nature or a natural order or things. These justifications are pure ideology to defend inequality and the devastation of the planet, which are deeply linked since the increase in profits is very closely tied to the syndrome of increasing production that is destroying oceans, rainforests and using most natural resources in such a way that they will last for only a few generations.