Last October 21-24, a delegation from Japan’s Seikatsu Club landed in Québec City in order to catch up on the evolution of the social economy in Québec since their last visit in 2007.  The delegation was composed of three people from the Civil Policy Research Institute (CPRI), the research centre created by Seikatsu.

The Seikatsu Club is a federation of 32 consumer co-operatives with 350,000 members in total, who purchase food directly from producers.  In 2012, Seikatsu’s overall revenues were approximately $1 billion (CAD).  For more information about Seikatsu, see CCEDNet’s 2011 webinar.

I accompanied them over four intensive days of meetings, which allowed them to deepen their knowledge of the evolution of Québec’s social economy.  It is worth noting that, in Japan, government policies are not favourable for the social economy in general and co-operatives in particular.  For example, in practice it requires between 500 and 1,000 members to create a consumer co-operative and there is no law to create worker cooperatives.  As they did after their 2007 study tour (when 11 people came), their goal is to promote more enabling laws and public policy initiatives with governmental decision-makers in Japan.  Their visit was well timed, just two weeks after the the October 10th adoption of Québec’s new Social Economy Law.

Here are some photos from a few of their meetings: 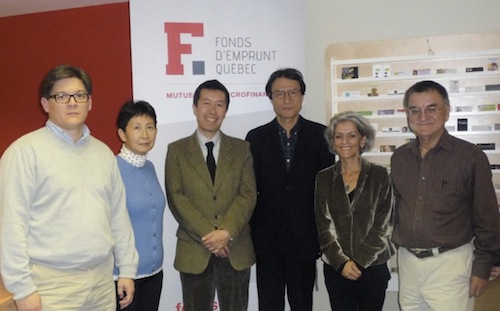 These exchanges between organizations always provide rich learning opportunities and reinforce the learning and solidarity between the organizations and the people who are working for a better world.

Yvon Poirier is President of CCEDNet’s International Committee and Secretary of the Board.