Communities are at the heart of what CCEDNet peeps do.  So it shouldn’t be a surprise that when you put 230 community champions together over three days, you get one heck of a community.

Hosted by CCEDNet member CEDEC, ECONOUS2016 was the first national CED conference in several years, so there was a lot of catching up to do.  Interest was high.  Participants came from nearly every province and territory (next time, Nunavut!) and an amazing cross-section of backgrounds.  A glimpse at some of the organizations represented gives you an idea.

Leading up to the conference, a tremendous amount of preparation went into the conference design.  We had an excellent Program Committee from diverse sectors who advised on speaker and workshop selection, support from Michelle Holliday and Michael Jones on engagement strategies, and an important preliminary meeting of thought leaders to identify key questions for the event.  The report of that meeting set the stage for ECONOUS2016, focusing our three days around three guiding questions: 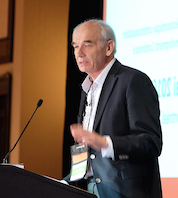 To begin with the theme of celebration, having Rankin MacSween deliver the opening keynote was a natural fit.  Rankin is CEO of New Dawn Enterprises in Sydney, Nova Scotia — Canada’s first community economic development organization — which is marking it’s 40th anniversary this year.  Definitely a milestone to celebrate!  Rankin is a masterful storyteller, and his opening keynote emphasized the principles that have guided New Dawn Enterprises over its 40-year journey:  faith, hope and freedom.  But being one of the leaders of CED in Canada does not mean it’s always easy.  Rankin’s tale of New Dawn’s near death experience in an epic battle with the federal government over a development project was sobering.  New Dawn’s survival and subsequent success is a lesson in persistence and resiliency.

That lesson is also apt for CED in Canada more broadly.  The decades since CED came to Canada have been ones of smaller government and growing individualism.  In this context, the tremendously diverse scope of community-led innovation presented in workshops at the conference is all the more impressive. 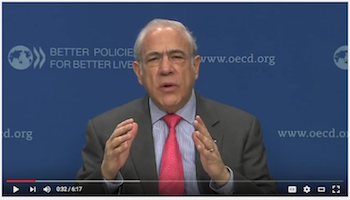 And it is encouraging to hear that the highest-levels of policy-making recognize the need for greater community leadership.  In his remarks to the conference, Angel Gurría, the Secretary General of the Organisation for Economic Co-operation and Development couldn’t be clearer:  “The only way we can promote inclusive and sustainable growth is by working with our local communities.  Development is always a bottom-up process.”

Thursday’s morning plenary considered the many strategic opportunities facing CED currently.  Renowned McGill management professor Henry Mintzberg spoke of the need not just for leadership, but ‘communityship’ and rebalancing society with a strong ‘plural’ sector.  Jonathan Rosenthal of the New Economy Coalition recognized the need to reweave the fabric of our human connections, and heal the historical wounds of ‘othering’.  Nancy Neamtan of the Chantier de l’économie sociale in Québec emphasized the huge potential of creating socially-oriented, community-rooted businesses, and Laure Waridel of the Interdisciplinary Research Centre of Sustainable Development Operationalization suggested that CED can help redefine the logic of development to one that prioritizes human well-being in a viable ecosystem. 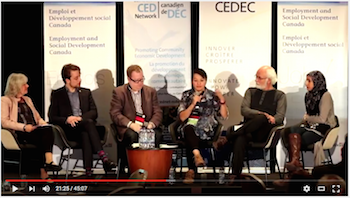 The Friday morning panel was a high point for many.  A frank discussion on what’s next for CED between two pioneers in the field and three passionate newer voices produced a human ‘ice cream sandwich’ when the young Algonquin entrepreneur Marie-Cécile Nottaway noticed the very pale-skinned Mike Lewis was seated between herself and first generation Canadian Nadia Kidwai.  Questions of diversity and inclusion, as well as the language and framing we use to speak about CED, created some very important and heartfelt moments on stage.  Laurent Lessard, from the student housing social enterprise UTILE, suggested that CED should assert itself as a development approach with ‘trickle up’ economics to replace the failings of the trickle down model.  Marie-Cécile revealed that she is in business for her family and her community, and that ‘it takes a community to raise a business.’  The panel closed with call to reach more diverse audiences with the CED message. 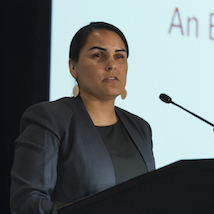 Carol Anne Hilton’s keynote on #indigenomics was a powerful illustration of how that is already happening.  An idea that originated as a Twitter hashtag, Carol Anne explained the rationale that led to its creation:  because new thinking is required, new language is needed that can provide a platform for understanding, bringing new perspectives and expanding awareness.  With calls for greater responsibility in economic development and a rapidly evolving legal framework for Canada’s Indigenous peoples, #indigenomics reminds us of the ‘WHY’ – using indigenous wisdom to lead us to economic success. 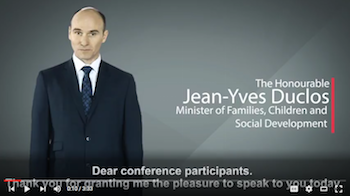 ECONOUS2016 identified several key opportunities for community leaders.  Two of those were mentioned by Jean-Yves Duclos, the federal Minister of Families, Children and Social Development, in his remarks to the conference.  He called for conference participants’ input on two important federal government initiatives:  a social innovation and social finance strategy, and a national poverty reduction strategy.  CCEDNet will continue to share information about consultations on those strategies and work with members and partners to provide clear recommendations to make those strategies effective.

Ultimately, that was the final message of the event.  The amazing innovation being led in communities is constantly evolving, and our ability as community leaders to make an ongoing impact is multiplied by the connections that continuously provide