RIPESS, the Intercontinental Network for the Promotion of Social Solidarity Economy, participated for the first time in the UN and International Organizations Civil Society Focal Points meeting held at the World Bank Headquarters November 17-18, 2014. A dozen organizations from civil society, such as Save the Children and Rethinking Bretton Woods, were invited to this 11th annual meeting. There were about 50 participants from different financial institutions such as the World Bank and the regional development banks and many UN institutions such as the International Labor Organization (ILO), the United Nations Development Program (UNDP) and the United Nations Department of Economic and Social Affairs (UN-DESA). The Office of the UN Secretary-General was also present.

The United Nations Non-Governmental Liaison Service (UN-NGLS), in light of its role as a liaison with all UN institutions, played a key role in designing the program. Locally, staff from the Inter-American Development Bank (IDB) and the World Bank were great hosts. The International Monetary Fund (IMF) also supported the event. John Garrison, Senior Civil Society Specialist at the World Bank and a strong supporter of civil society involvement in development, also played a key role at the meeting, having been involved in all the previous meetings. 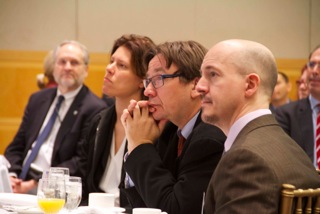 The opening plenary set the tone for the event. Thomas Gass, Assistant Secretary-General for Policy Coordination and Inter-Agency Affairs in UN DESA, presented very well the Sustainable Development Goals (SDGs) process. He insisted on the vision of inclusive development goals (no one should be left behind) focused on three pillars – economic, social and environmental. The 2015-2030 SDGs will be adopted at the September 2015 General Assembly. The document that will be the basis for negotiations by the member states leading up to the General Assembly will be released by Secretary-General, Ban Ki-moon in early December.

“Development…must benefit all sectors of society”

Nathalie Cely Suárez, the Ambassador of Ecuador to the U.S. presented her country’s position on the SDGs. Invoking the notion of buen vivir, she insisted that development, including natural resource extraction such as oil drilling and mining (both of which are important to Ecuador’s economy), must benefit all sectors of society, and in particular those communities where development activities are most prevalent. In Ecuador, she explained, the solidarity economy is embedded in the constitution.

RIPESS was invited to present during a workshop addressing the following question : how could the development community and international financial institutions collaborate with civil society to provide training, capacity building, and adequate access to affordable long-term finance to expand the potential of social solidarity economy (SSE) organizations?

The Civil Society Focal Points meeting in Washington highlighted the need for us to clarify when connecting with International financial institutions that we are not “just” CSOs. On the contrary, we are in fact part of the private sector, not the public sector. As economic actors we are just as legitimate as the traditional for-profit sector. We can even assert that, as collective enterprises, we are more resilient, are more capable of lifting people out of poverty, and have less of an adverse ecological impact. Our economic units of production of goods and services are already geared to the three inseparable pillars: economic, social and environmental.

The next step is the Third International Conference on Financing for Development in Addis Ababa in July 2015. This conference is to plan how the 2015-2030 goals will be funded. The UN Inter-Agency Task Force on Social and Solidarity Economy (TFSSE), within which RIPESS has a formal observer status, is planning a position paper on the theme of funding SSE within this framework.

For more information, see the Summary Report of the Meeting.