The 2014 International Volunteer Cooperation Organisations (IVCO) conference was held October 19-22 in Lima, Peru. Forum, a global network of organizations involved in international volunteering, co-organised IVCO 2014 with Uniterra, the largest Canadian volunteer program, which is co-managed by CECI and WUSC. Simultaneously, Uniterra held an International Seminar from October 13-25. On Wednesday October 22, these two events were joined with all Uniterra participants attending the IVCO conference.

One of the highlights of IVCO 2014 was a videoconference with Amina J. Mohammed, Special Advisor of the Secretary-General on Post-2015 Development Planning, streamed from the UN’s headquarters in New York. A Q&A period followed that sought to address the place for international volunteering in the Post-2015 Sustainable Development Goals (SDGs).

Amina J. Mohammed during her videoconference

Many interesting discussions and debates took place over the course of IVCO 2014, in particular on the importance that most OECD countries, including Canada, place on the involvement of the private sector. A general consensus seems to exist that working with small and medium enterprises (SMEs) is not an issue, since this is already the practice. Important issues arise, however, when working with large multinational corporations.

A few speakers mentioned that about two thirds of corporate social responsibility (CSR) programs are a failure. Many corporations have such programs to “look good” and are not real commitments. Some corporations do better. For example some corporations incentivize staff to become personally involved in the volunteer sector. These corporations understand that volunteer experience can enrich the capacities of staff while helping people in less advantaged situations.

One of the issues where there appears to be no consensus is the involvement of mining companies in international development, most of which happen to be headquartered in Canada. Some would unequivocally say no to signing an agreement with such corporations. Others seem more flexible, making decisions based on how committed the mining companies are to help communities and preserve the environment. However, I did hear one clear trend emerge. “We will not have partnerships with mining companies, but with the communities where mining companies operate.” This might mean, for example, helping communities to set up businesses that hire people locally to provide maintenance and/or food services for staff of the mine. As we heard during the Uniterra seminar, a business like this was created in Burkina Faso with the help of the Uniterra programme. The business is led by a group of young people and serves different mining regions in the country. A similar company exists in the Abitibi region of Quebec, providing machinery maintenance to the mining industry. 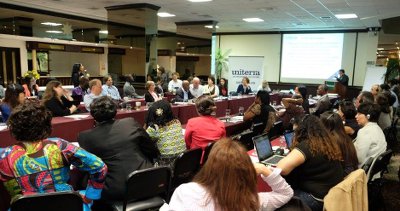 The IVCO 2014 program during the Seminar included a workshop on the Social Solidarity Economy (SSE), in which CCEDNet, a Uniterra partner since 2005, played a speaking role. This was an occasion to share with approximately 25 workshop participants the efforts being made to ensure that the SSE is incoprorated into the Post-2015 SDGs. The workshop also highlighted the work of two organizations: Tikonel from Guatemala which works with 1,700 indigenous producers to improve their livelihoods; and Red OEPAIC, a network of people producing and marketing handicrafts in Bolivia.

The Uniterra Seminar on October 22nd included participants from all countries (13) that will be involved in the 2015-2020 Uniterra program (funding approval confirmation is expected in the next 2-3 months). Unfortunately, our friends from the Mali network (RENAPESS; they have attended CCEDNet conferences in the past) were unable to attend because of visa problems. The Seminar was a great occasion for all participants to learn about the future program since it will be much more focused on economic and enterprise development than the first two programs (2004-2009 and 2009-2014).

Volunteer involvement of CCEDNet members will be important during the 2015-2020 program since as CED practitioners, and often specialists, we will better “fit” within the new priorities. However, practical challenges still exist. As the word suggests, to be a “volunteer” implies a leave of absence from salaried (or consultant) jobs. Not many CCEDNet members have the capacity to undertake this, except for sometimes very short missions (a couple of weeks of vacation time or unpaid leave).