Since the early days of the Network, through the creation of the International Committee in 2007 and continuing today, CCEDNet has been an active partner in international movement building, learning and representation.  2013 was no exception.  Here is an overview of activities that CCEDNet was directly or indirectly involved in over the last year.

In partnership with the Uniterra program, I attended the WSF in Tunisia (March 26 to 30).  Since CCEDNet is also a member of Intercontinental Network for the Promotion of Social Solidarity Economy (RIPESS) North America, the participation at this event was prepared with RIPESS Europe and with RAESS (RIPESS Africa). Ten workshops were organised, reports and press releases were prepared.   Maude Brossard from the Chantier de l’économie sociale du Québec, also a RIPESS member, was also very involved in the process, including workshops in Tunis. The WSF was an occasion to deepen links with other Québec and Canadian organisations, in particular people from the Union movement.  Read more here.

Maude and I were able to attend the 2nd meeting of the Réseau africain d’économie sociale et solidaire (RAESS), the RIPESS continental organisation for Africa. This meeting, held March 24-25, in Hammamet (about 60 km form Tunis) was a great opportunity to develop closer ties with African colleagues involved in RIPESS.

CCEDNet participation at the WSF was possible because of the partnership with Uniterra (a joint CECI and WUSC) program.

Also as part of the Uniterra program, I agreed to a one-week mission in Guinea (a Western African country whose capital is Conakry) from March 18 to 23, just before the WSF. In part, this was follow-up to a mission of two people from Guinea who came to Quebec and Acadian regions in 2012.  At that time, I had accompanied this mission on behalf of CCEDNet.  For example, there were visits to projects of the Microfinance Mutual in Guinea. This Mutual is in partnership with the new Mutuelle de microfinance (Québec).  Seeing in person the situation in one of the poorest countries in the world is useful. Also interesting to see the presence of Canadian Corporations such as Rio Tinto and Alcoa.  Guinea has 2/3 of world reserves of bauxite.

The Microfinance webinar (in March) was quite successful. There were two, one in English and one in French. The example of the Mutuelle de la Microfinance MECEPAG in Guinea (in coastal fishing communities) and the Mutuelle de Microfinance (Québec) proposed by the Fonds d’Emprunt Québec (the community loan fund in Québec City). The Québec National Assembly had unanimously adopted this law in December 2012. There are many similarities between microfinance in the South and in the North, when practiced in a collective manner, with full involvement of the clients / members. 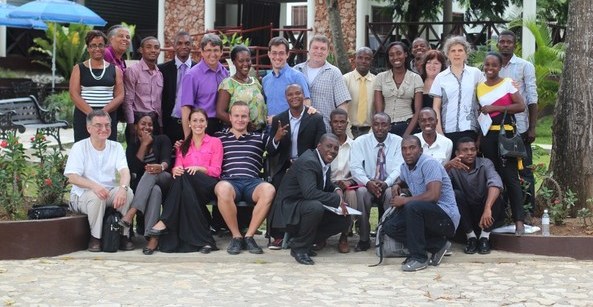 CCEDNet and the Chantier de l’économie sociale were official partners of the Centre in a meeting held in Haiti last May to examine the possibility of organising networking on the SSE, mainly through knowledge exchange, websites, and participation in different events.  The purpose is to promote SSE as a tool in French speaking communities, in particular for those in minority situations. CCEDNet and the Centre are looking at ways or formalising collaborations for work both within the Canada and in the rest of the francophone communities of the Americas (about 33 million people are French, or French speaking).

Ethel Côté, a member of the International Committee, was invited by this International women’s organisation to a conference in Paris last Spring as specialist on SSE. Ethel was officially a CCEDNet delegate.  Ethel is continuing work within this organisation. 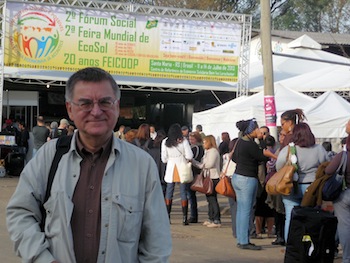 Since both RIPESS Board members at that time for North America, Nancy Neamtan and Emily Kawano, were not available, I agreed to represent RIPESS North America at this meeting in Santa Maria, Rio Grande do Sul, in the south part of Brazil.  Two youth delegates close to the Chantier were also at the meeting held in July (7 to 10).  I presented the history of RIPESS movement from 1997 to today in a plenary session. The meeting was an occasion to know better Paul Singer, the Brazil Federal government Secretary of State for Solidarity Economy. The international presence from RIPESS (one each from Asia, Africa, Latin America, Europe and North America) was useful for the organisation to make this event truly international. Interestingly, in South America, Solidarity Economy is the name in use. Nobody uses SSE, except at the continental level (RIPESS LAC-Latin America and Caribbean).

Even if the international aspect for CCEDNet was not predominant at the Social Enterprise World Forum held in Calgary this past October, the CCEDNet reception and meetings with Bob Massie from the New Economy Coalition were very useful to build relationships within North America.  Watch Bob’s powerful talk.

Pat Conaty from the UK, co-author of the book The Resilience Imperative with Mike Lewis, was also in Calgary. I enjoyed meeting with him and catching up – last time was in 2004. Pat is with the New Economics Foundation (NEF).

CCEDNet Executive Director Mike Toye met Bob Massie, the New Economy Coalition  (NEC) President in Boston last June.  Subsequently, considering many similarities in the vision and work of NEC and of CCEDNet, the CCEDNet Board agreed to accept the invitation made in June to join NEC.  Since NEC and NEF are collaborating a lot, we are now in closer ties and we are involved in sharing on-line, and attending webinars organised by NEC.